Not to be confused with the Barbarian Outpost east of East Ardougne.

Barbarian Village is a small village found east of Falador to the west of Varrock. As the villages name suggests, many Barbarians are found roaming around here. There are other several notable features.

There are 3 tin and 4 coal rocks to mine. The coal rocks provide a viable alternative to the mining guild which can often be overcrowded. The nearest bank is to the north in Edgeville.

There is a bait/lure fishing spot for trout and salmon in near the bridge, on the side of the river that is inside of the Barbarian Village. The lure method of fishing consumes feathers and requires a fly fishing rod. It is known to offer some of the fastest XP per hour possible for the fishing skill. 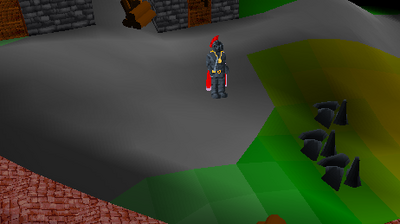 Killing barbarians may be a worthwhile option for low to mid level players who who wish to train their combat skills. There are 2 Cooked meat and 3 beer spawns located inside the longhouse at the Barbarian village, which is west of Varrock. The meat may be used as a free food source. Some players use the tables in the longhouse as a safe spot from which to train ranged or magic skills. There are also 2 log fires which never burn out in the back of the hall.

Barbarians drop somewhat valuable items and some players may choose to kill them in search of loot which they can use to train their skills, collect, or trade to other players. Killing Barbarians at the Barbarian Village and banking in west Varrock is the best method for players seeking to collect loot obtained from killing them.

It is easy to get normal barbarians and Gunthor the Brave mixed up. He can be distinguished by his lighter colored orange shirt. Misclicking Gunthor could be dangerous for players who don't have higher combat skills, or those who are low on hitpoints, as this unique Barbarian tends to deal higher amounts of damage than normal barbarians, and also has more hitpoints.

Peksa is a shopkeeper who owns a helmet store in which he sells all helmets ranging up to adamantite grade.

Retrieved from "https://runescapeclassic.fandom.com/wiki/Barbarian_Village?oldid=89391"
Community content is available under CC-BY-SA unless otherwise noted.