Charlie is a monster being held prisoner in the Cage at the top of The Grand Tree. He is involved in The Grand Tree quest, having been paid by Glough to transport a Daconia rock and a letter for Hazelmere. At level 0, he has the lowest combat level of any monster in RuneScape Classic. He cannot be attacked or killed with melee, ranged, or magic combat and therefore he drops no items at all. 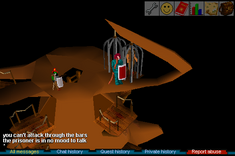 This article on a monster has an associated dialogue page.Template:TheGrandTree

Retrieved from "https://runescapeclassic.fandom.com/wiki/Charlie?oldid=86321"
Community content is available under CC-BY-SA unless otherwise noted.