The Crystal chest is located in a house north of Jatix's Herblaw Shop in Taverley. To open the chest, you need a Crystal key, which is created by using a rare key half on its opposite half. These key halves are dropped by any monster with access to the rare drop table.

Although it is simply referred to as a chest in game, players call it the "crystal chest" for distinction because it requires the crystal key to open.

The Crystal Chest is currently unusable on all official RuneScape Classic servers due to a glitch that is suspected to be purposely and repeatedly performed by either one or several Classic players. The glitch causes the chest to remain permanently opened, which prevents a player from using a crystal key to receive loot. This has caused a distinct increase in the rarity of uncut dragonstones and it's related products.

This glitch and the relatively small community obtaining very rare drops from monsters have caused uncut dragonstones to become much more difficult to come by, with the only other source being "Very Rare" drops received from killing Black dragons, Red dragons, and King Black Dragons. Alternatively cut dragonstones are also available as a "Very Rare" drop received from killing Black Demons & Fire Giants.

This glitch has also removed one of the only two viable methods of collecting spinach rolls, with the remaining option being killing Moss Giants. There is a third method of obtaining them, which involves being lucky enough to roll a very rare chance to spawn one from smashing Strange Barrels. However this method is extremely time consuming and requires partial completion of Legends' Quest.

The chest becoming disabled also caused the crystal key and key halves to become mostly worthless items, although they are still traded and sold for many coins.

Jagex has yet to fix the issue, and a J-Mod has stated in a post on the Official Runescape forums that Jagex is unlikely to spend time fixing the glitch, and that if it were ever to be solved, it would have to be on the personal free time of an employee. [source needed] This problem is further compounded by the fact that few remaining staff members have working knowledge of the RSC game code. It is also believed to be a futile attempt, as the glitch is likely repeatable and could take a good deal of time to write new code that would permanently prevent the glitch. There are players who claim to understand how the glitch works and several have contacted Jagex directly about it. [source needed] 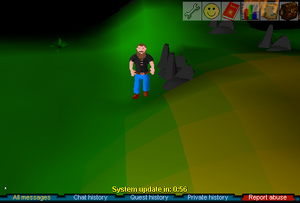 On 18 April 2018, a system update refreshed the RuneScape Classic, RuneScape 2, and RuneScape 3 servers, and temporarily fixed the infamous Crystal chest glitch. The servers came back online at approximately 5:47 PM GMT and every chest on every world was glitched again by 7:21 PM GMT. Despite the relatively small window of time, the server refresh allowed players to use their crystal keys, resulting in several thousand [source needed] new uncut dragonstones being brought into the market. 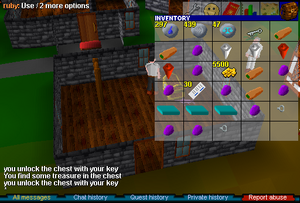 The player will always receive one uncut dragonstone from opening the chest, and never more than one at a time.

Retrieved from "https://runescapeclassic.fandom.com/wiki/Crystal_chest?oldid=89389"
Community content is available under CC-BY-SA unless otherwise noted.