This article is about the object. For the quest, see Dwarf Cannon. 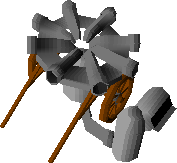 The cannon consists of four pieces: the base, the stand, the furnace, and the barrels.

Setting up the cannon

To set up and use the cannon, you must:

The instruction book briefly describes how to use the cannon, it can be bought from Nulodion. See article: Instruction manual

Retrieved from "https://runescapeclassic.fandom.com/wiki/Dwarf_cannon_(item)?oldid=89507"
Community content is available under CC-BY-SA unless otherwise noted.