Preparations before the Quest to save time:

Travel to Hemenster, which is north of East Ardougne and south-west of Seers Village. Talk to Grandpa Jack, located in the northern house, and he will tell you the secrets to his fishing ability which allowed him to win the Fishing Contest for so many years.

He advises you to always use the fishing spot next to the pipes. He tells the player that the best bait he had ever used were some red vine worms that he dug up in McGrubor's Wood.

With a spade in your inventory, head north from Hemenster to McGrubor's Wood. If you try and enter the woods through the main entrance, the Foresters will tell you that it's a private property, and that you can't enter. Therefore, you will have to find a different entrance. Head east along the fence and you will find a fence with loose pannels,[sic] which can be pinpointed by finding a small gap in the grey lines on your map

Once inside, you must find the red vine, which is located in the western part of the woods. Use your spade on the vine and you will obtain red vine worms. Head back to Hemenster, exiting via the break in the fence that you entered from. 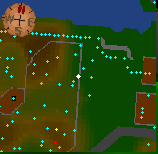 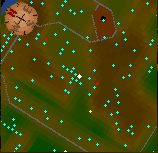 Use spade on the Vine
Click an image to enlarge

Once you have obtained garlic, a fishing rod, red worms, your Fishing competition Pass, and 5 coins, go back to Hemenster to enter the contest by talking to Bonzo.

Use the garlic on the pipe next to the sinister stranger, to the north.

Talk to Bonzo to start the competition, and the vampire will complain of the smell and swap fishing spots with you.

Cast out your rod and you will catch a giant carp.

Talk to Bonzo and he will tell you to wait for the time to be over.

A few of seconds later, the contest will end and you will be given the Hemenster fishing trophy for winning. Go back to either of the two mountain dwarves to complete the quest.

Well done you have completed the fishing competition quest [sic]

Retrieved from "https://runescapeclassic.fandom.com/wiki/Fishing_Contest?oldid=88680"
Community content is available under CC-BY-SA unless otherwise noted.