Merlin is a non-player character located on the second floor of Camelot Castle, to the south east. The player must free him from the Giant crystal in the south-eastern tower of the castle during the Merlin's Crystal quest. He also provides the player guidance during The Holy Grail quest.

Merlin is a light skinned man with a white beard who is wearing a blue wizards hat with blue wizards robes. He is wielding a staff.

This article on a non-player character has an associated dialogue page. 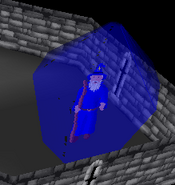 Merlin trapped in a crystal.
Click an image to enlarge
Retrieved from "https://runescapeclassic.fandom.com/wiki/Merlin?oldid=78824"
Community content is available under CC-BY-SA unless otherwise noted.