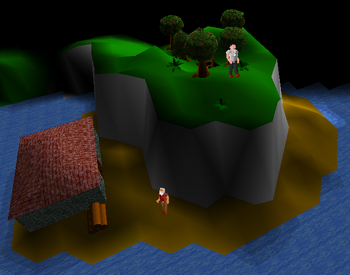 Thurgo's Peninsula is an area that players must visit to complete The Knight's Sword quest. A clifftop contains the entrance to the Asgarnia Ice dungeon in which players can mine blurite for the quest. Thurgo is an Imcando dwarf who lives in a small hut on the south shore, and he is the only known dwarf of his race in RuneScape Classic.

Retrieved from "https://runescapeclassic.fandom.com/wiki/Thurgo%27s_Peninsula?oldid=89861"
Community content is available under CC-BY-SA unless otherwise noted.