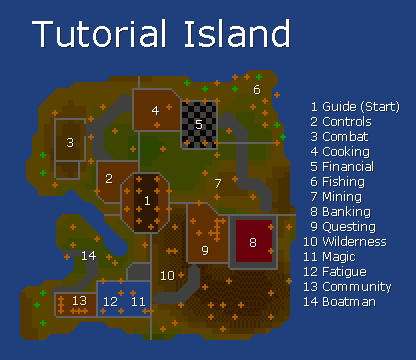 Tutorial Island became the first place a player loads into when starting RuneScape Classic. It was added to the game on 24 September 2002 (Update). It is possible to skip the tutorial by going to Options and selecting the "Skip tutorial" option. Characters created before Tutorial Island was added spawned in Lumbridge as if they had skipped it.

After the player registers and successfully logs into their account, they will be immediately prompted to select their character's gender and outfit (head type, and color of hair, shirt, and pants). The player is then instructed on how to use various skills and will receive some basic items. The island is similar to the Tutorial Island's which may be found in later successors of RuneScape. After completing or skipping Tutorial Island, the player will appear in Lumbridge, on the same tile where a player will go if they are to die.

This article on a quest has an associated transcript page.

These are the humanoid inhabitants of Tutorial Island, in the order of which they are encountered by players:

When RuneScape Classic was first released on 4 January 2001, players who made accounts would immediately spawn in Lumbridge. Then between early March 2001 and July 2002, players were prompted to select a class when creating an account and prior to spawning. Before the release of the Wilderness in August 2001, players got to choose if they wanted to be a player killer or a non-player killer.

Depending on the class chosen, new players would start with a higher level in the appropriate skill at a compensation of lower skill levels in other areas and then be spawned in Lumbridge.

When the class system was removed and prior to Tutorial Island, all new players would start with a bronze axe, one piece of cookedmeat, and tinderbox, which was the same equipment given to the players in the past if they had selected the adventurer class.

Room you spawn in that Guide is also in

Room that has Controls guide

You can see a sinking Fishing Trawler

You can see a sunken Fishing Trawler

Area with a rat and Combat instructor

Room with a range and Cooking instructor

Class system before the Wilderness update
Click an image to enlarge

Retrieved from "https://runescapeclassic.fandom.com/wiki/Tutorial_Island?oldid=90877"
Community content is available under CC-BY-SA unless otherwise noted.