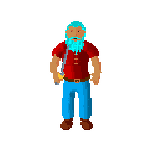 Hey Shasta! Just wanted to say thanks for all of your help on the wiki as of late :)

Ohhh it took me a minute to realize what you were getting at. There is no incomplete status in the in-game quest list. It is red if you have not started it, red when you start it. It then goes green only when quest is completed. I have quite a few quests almost completed that are most certainly red still. Shasta Sms (talk) 02:27, May 11, 2018 (UTC)

Yeah, I had just recently taken the RS3 wiki's template for transcripts to try and standardize my dialogues.Shasta Sms (talk) 16:58, May 26, 2018 (UTC)

I'm not sure if you knew by now, but apparently the RSC+ client now dumps text into console (but does not do so for blue options). The version that does this is the one in zip file, named "rscplus_console". Sometimes, the blue options may be slightly different than what the player says however. Hope it helps. --Jlun2 (talk) 19:29, May 27, 2018 (UTC)

Now the received blue options from doing actions such as talking or dropping special items should be sent as well to the console, be sure to check out the latest version Jlun2 --Luis12345lts (talk) 22:38, May 27, 2018 (UTC)

Hey, thank you for helping add into the bubbles. Do you think you could re-upload the file "Creating_a_onion_and_tomato_mixture_bubble.png"? It seems it didn't get uploaded well into the server. Thanks. --Luis12345lts (talk) 20:12, May 26, 2018 (UTC)

That was odd, it was actually displaying to me just fine. Then when I reuploaded the original went corrupted to me. Anyway, it is done. I actually need someone to make kebabs for me to figure out this whole tasty kebab business... damned be that high cooking lv. Shasta Sms (talk) 20:19, May 26, 2018 (UTC)

Hey I figured out it made a difference the order of using things when making the ogre potion in the buble shown. Wonder if you had tried swapping the order when you took the capture for the digsite potions, and if not maybe new bubbles appear. Could you try running the test? Thanks --Luis12345lts (talk) 05:38, July 14, 2018 (UTC)

Found one with gnome baller. The talk option acts as the tackle option in this case. Also if you want, there's a discord channel for RSC, along with a list of stuff left to do in here. Thinking of making a category for "default" not interested in talking NPCs, then making a dialogue page instead for those with special ones. Thoughts? --Jlun2 (talk) 12:22, June 1, 2018 (UTC)

Hi, I am currently making a "choice tree" wich indicates wich choices are missing in quest dialogue NPCs. From a quick glance at Youtube, apparently you have a channel with RSC quest on it. As you know, RSC is gonna get nuked in early august so I thought about the most efficient way possible to grab organize data collection. I know it is very unlikely, but if you happend to still have your video somewhere on your hardrive(s) consider using ffmpeg, a command-based video decompiler to extract frames from the videos so that we have access to dialogue and choices that are transcribable (so we can prioritize other choices and dialogue) and then upload it somewhere, MEGA give 50gb space for free. Having image instead of videos would be way much easier to navigate (thus saving time) and possibly text recognition, though I wouldn't count on it. Thanks for replying!

Regarding quest dialogue, I think Hazeel Cult evil side has already been recorded with rsc+. You should also join their Discord server here to have acces to the replays and try to fill what is missing.

Ok, ill try to check out.

Hey, I saw that on the dialogue page for the Guildmaster it was like:

On my character it was added *Guildmaster: by gaining influence from quests are allowed in here in after worthy and before as the number of quests. Just wanted to verify that it had appeared to you without the line, and maybe check if at some point on your char that line gets added, if not maybe it concerns account age?--Luis12345lts (talk) 07:09, June 10, 2018 (UTC)

Hey, threatening the Mercenary by the lift platform no longer becomes possible after the quest, I saw in my possible dialogue options and they were different from the ones you placed during quest. One was what is that thing and the other was like could I use it, but both leading to dead-end and also had ok thanks after those two options. So the crude bed only becomes accessible during the quest by your method. I don't know if you had finished it, but did you try checking up on the mining rocks inside the jail what they were? --Luis12345lts (talk) 23:49, June 14, 2018 (UTC)

Thank you for writing on those rocks I never knew they could be at some point accessed. So that section of the map is like http://www.bishopd.com/mainpages/games/rsc/maps/dester_mining_camp_dungeon.png. Thanks --Luis12345lts (talk) 00:55, June 15, 2018 (UTC)

Hey, just finished recently the Observatory Quest, and I added the 12 possible constellations. From the dialogue you transcribed I saw you got the Taurus constellation. Could you confirm that I labeled it correctly from the image? Also if you want verify the others marked with asterisk if they sound right to you. The ones marked without * I have already verified either by looking on youtube videos or by the ones I had gotten, its just the ones in asterisk kind of guessed by looking on how it was on OSRS quest guide and how they appear on google. Thanks. --Luis12345lts (talk) 21:51, June 25, 2018 (UTC)

Thank you for confirming, hadn't seen the page. I was wondering could we keep the images I uploaded for the constellations (labeled right now Con1.png, Con2.png,...,Con12.png) they are all standard to cover only the size of the window 400x300 px. Also would like to know if you have any possibilities of renaming them since we have determined which one matches which (probably all are correct now), in the OSRS wiki they named theirs like "Star Chart Viewer Aries.png" so maybe we could adopt that name here or "Constellation Aries.png" or something on that road. --Luis12345lts (talk) 15:06, June 26, 2018 (UTC)

Drop the red/blue/yellow scrolls, drop the stone plaque, drop the bone key, drop the bone shard, drop the locating crystal
try to climb cart before finishing the quest
show truffy EVERYTHING (I purposely avoided showing him anything in the quest, because the wiki implies it’s necessary, and it turns out it isn’t… a lot of dialogue may be on youtube)
never failed at the handholds or the waterfall in that first dungeon area

Thank you, sure struggled somewhat to find them hehe. To what my mind comes and my internet archive digging, I only recall those but will continue searching (besides I'm also searching for images of Jagex manuals of the game on 2003). If you happen to have saved those manuals from 2003 sure would appreciate the images they had. --Luis12345lts (talk) 15:49, August 19, 2018 (UTC)

I've found out an update that we could make to 4 manuals updates, namely for:

Those manuals pretty sure fall by end 2003 or beginning 2004 as I haven't been able to dig on that time, the 2004 digging I have found the manuals already included for rs2 version. I've check with other new manuals of the skills and they don't seem changed content wise.

Yea sort of I mean like for example I updated the manual of Crafting to the 2003 version (was before 2002) don't know if I should have made a distinct page, i mean the changes for that were expansion. For the fatigue manual there are two ones, in early 2003 like April 9 2003 where it says of the food. The one in August 26 2003 I think its the final one. Mining, smithing and magic were the other 3 manuals in question but I don't know how to handle those yet (probably would have to do separate ones for them since 1)I don't know on what date those manuals could have changed and 2) have not found from digging in archives those files. I don't think the guy would lie but also need to make sure he didn't complete the tables --Luis12345lts (talk) 06:26, August 20, 2018 (UTC)

Re: Request for adminship

Retrieved from "https://runescapeclassic.fandom.com/wiki/User_talk:Shasta_Sms?oldid=85775"
Community content is available under CC-BY-SA unless otherwise noted.